Since the COVID-19 pandemic, there has been a wave of digital transformation in the energy industry. Digitalization and higher efficiency have become a necessity. Tohoku Electric Power Frontier was established as a new subsidiary of Tohoku Electric Power Company, in line with the digital shift under its Smart Society Business plan. In the early stages, Tohoku Electric Power Frontier will begin promoting tariffs that combine electricity and various services, focusing on the active smartphone segment where digital marketing has a high likelihood of being successful. However, the issue of building a registration infrastructure that allows customers to easily apply via the web remained, as did the lack of a tariff simulation function to enhance the customer experience.

Against this backdrop, Tohoku Electric Power Frontier has adopted our company’s SaaS-type energy marketing platform, EMAP, which has been implemented by dozens of electric power companies. This time, Tohoku Electric Power Frontier will be using the EMAP Simulation, a tariff simulation function, and EMAP Application & Operation, an application infrastructure service (*only during the pre-application period). Based on user behavior analysis from ENECHANGE’s namesake electricity and gas comparison site, the simulation function utilizes UI (user interface) noted for its high completion rate and an input form designed with ease of use in mind, providing a highly satisfying experience for users. 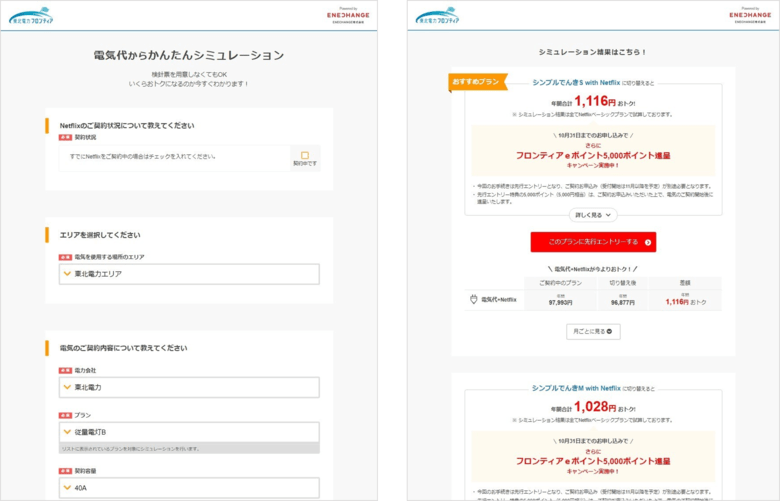 About EMAP, a SaaS-type marketing platform for electric power companies

We developed EMAP by utilizing the assets and expertise we have cultivated through our comparison business since the start of electric power deregulation in Japan. It targets companies that are considering digitalizing and increasing the efficiency of the power industry. EMAP is a one-stop support service, including the starting up of retail businesses, web-based customer acquisition, and customer management systems introduction and replacement.

ENECHANGE is an energy technology company that promotes a carbon-free society through digital technology with the mission of CHANGING ENERGY FOR A BETTER WORLD. We offer services based on data utilization in the field of the 4 Ds of Energy: Deregulation, Digitalization, Decarbonization, and Decentralization. Our company’s roots come from an energy data lab at the University of Cambridge, UK, a country where liberalization is well advanced. ENECHANGE has a British subsidiary, SMAP Energy Limited, as well as a global network and analytical technology for energy data.