73% felt they saved money on their electricity bills, and 75% were satisfied with switch

The primary reason for thinking about switching energy companies was to “save on electricity costs” (79.2%).
37.5% of respondents thought it would be difficult before switching → 53.0% said it was easy after switching.
73.1% felt they saved money on their electric bill by switching power companies.

In response to the question, “What made you decide to switch energy companies?”, the vast majority answered “to save money on my electricity bill” (79.2%). This was followed by “because of ENECHANGE campaign with incentives to switch energy companies” at 11%, indicating that more than 90% of respondents are considering switching energy companies to save money. Another answer was “because I was interested in environmental issues” (3.3%), which is likely due to the rise in interest in environmental issues such as the Sustainable Development Goals (SDGs) and decarbonization in recent years, as well as the rise in environmentally friendly electricity tariff plans. 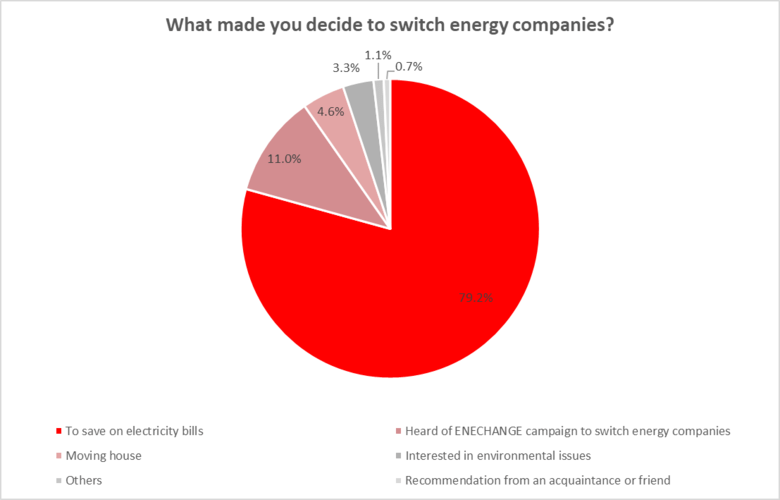 When asked about their impressions before switching energy companies the most common response was “troublesome and time-consuming” (37.5%), followed by “a reduction in electricity bills” (32.5%), “difficult to follow” (11.0%), and “post-switch customer service is lacking” (8.6%). We found that before switching, many people had the impression that it would be inconvenient or difficult. Yet after switching, the number one response was “it was easy” (53.0%). 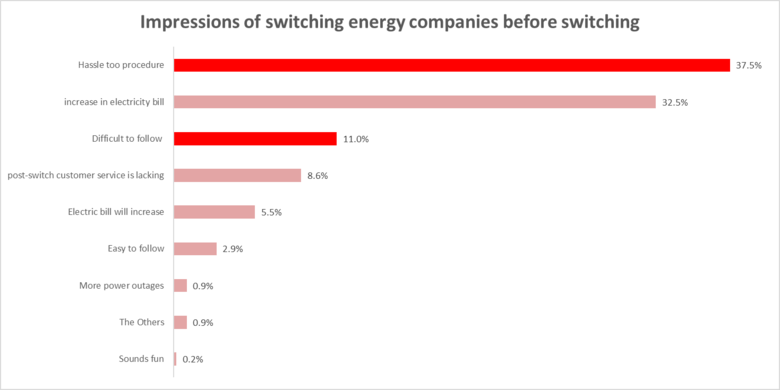 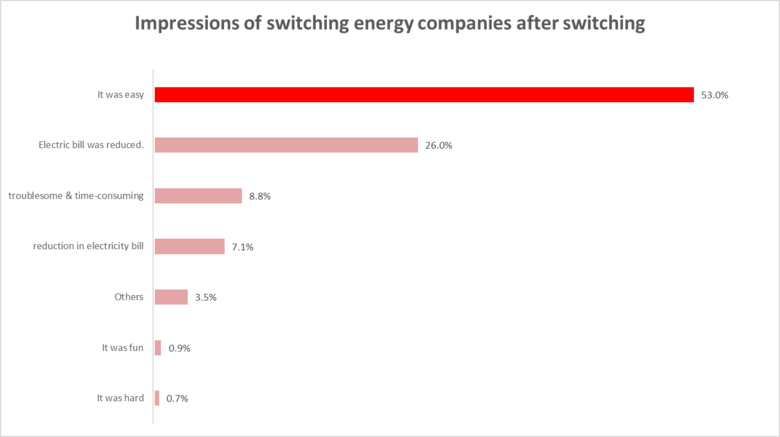 The deciding factor in choosing an energy company was low rates

In response to the question “What was the deciding factor in your final choice of energy company?” (multiple choice), the most popular answers were “cheaper electricity bills” (380 votes), “campaign benefits” (235 votes), “no cancellation penalties” (124 votes), and “points and miles redemption” (53 votes). Many people checked whether or not there were any cancellation penalties, and it seems that people are not only comparing monthly charges but also carefully considering each plan. 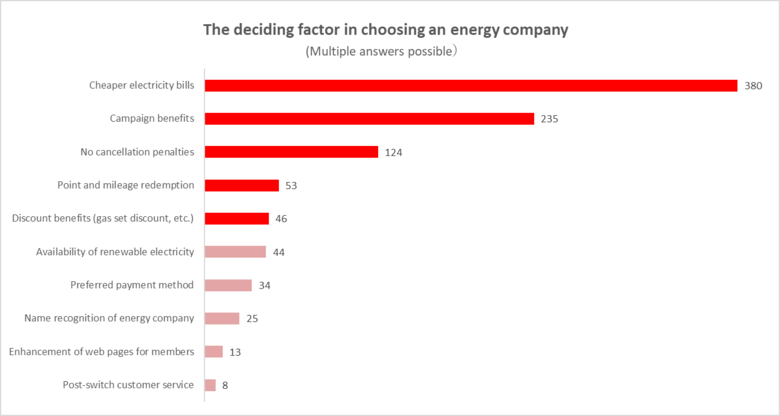 73.1% felt they saved on electricity bills per month by switching energy companies. In terms of monthly electricity bill savings, the most common responses were “¥500 or less” (24.5%), “¥501-¥1,000 ” (26.3%), “¥1,001-¥2,000” (15.2%), “¥2,001-¥3,000” (4.2%), and “¥3,001 or more” (2.9%). It seems that about half of the respondents are able to save from a few thousand yen to a maximum of ¥12,000 per year. On the other hand, there were also a few respondents who said that their electricity bill “did not change” or “became more expensive,” though only slightly. There are situations where, if customers choose a plan that does not fit their electricity usage, or if their family composition has changed since the initial price simulation, their electricity bill may become higher. We recommend that customers have a clear understanding of their current contract and usage, and to review their plan frequently when their family structure or electricity usage changes. 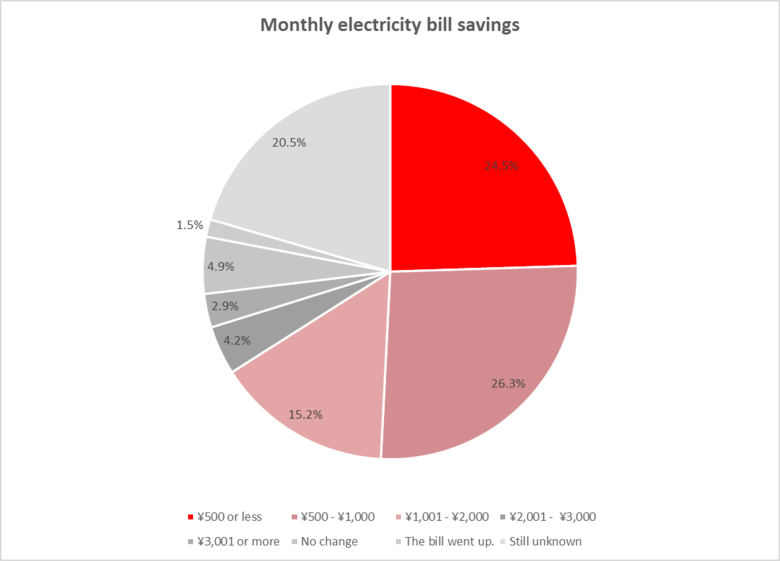 About 75% of respondents were satisfied with switching energy companies 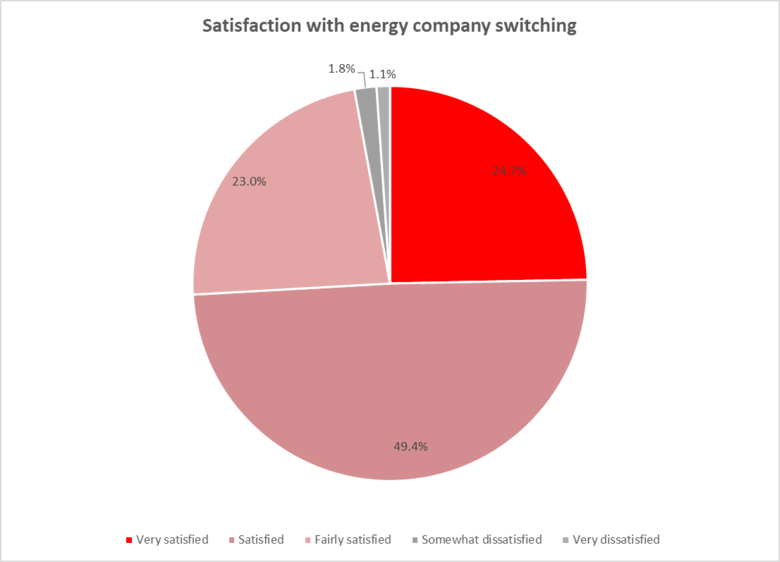 ＜Excerpts from respondent comments＞
I will continue to review my electric bill on a regular basis because it is cheaper and takes little effort. It was really easy to switch online, and I’m saving money on my electric bill.

I’m glad I switched because the process was easier than I thought, I was able to use it without any trouble, and my electricity bill has become cheaper.

Since I switched from a major energy company, I thought there might be some issues with this new plan as it was cheaper, but it’s been business as usual. I’m relieved that’s the case, and I’m glad I switched.

We are very glad to see that many users are satisfied with the ease of switching energy companies through our service. We will continue to provide better services and make “choosing energy” a common sense for many users.

ENECHANGE is an energy technology company that promotes a carbon-free society through digital technology with the mission of Changing Energy For A Better World. We offer services based on data utilization in the field of the 4Ds of Energy: Deregulation, Digitalization, Decarbonization, and Decentralization. Our company’s roots come from an energy data lab at the University of Cambridge, U.K., a country where liberalization is mature. ENECHANGE has a British subsidiary, SMAP Energy Limited, as well as a global network and analytical technology for energy data.