*1 API: Abbreviation for application programming interface. A mechanism to connect functions of software together.
*2 General term for the metropolitan area, the three largest urban areas in Japan.Tokyo (Saitama/Chiba/ Kanagawa), Osaka, and Aichi. prefectures. 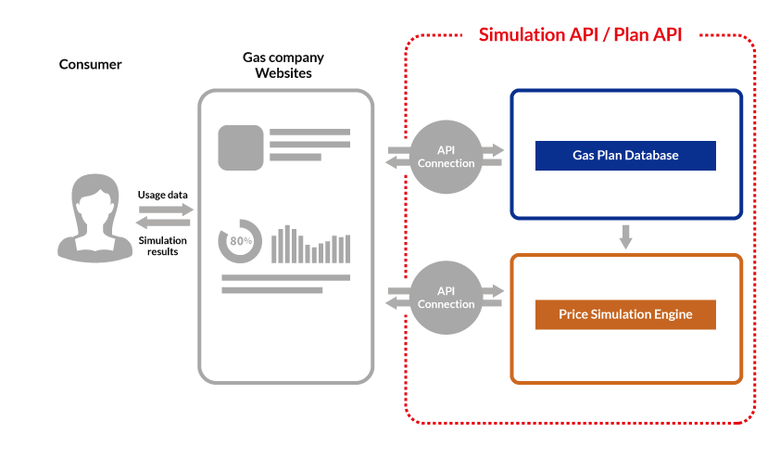 In Japan, the deregulation of city gas occurred in April 2017. Since then, the city gas retail market has been expanding, and the number of household contracts switching to other companies has been increasing. The percentage of switching to other companies has increased from approximately 9.4% of the total number of contracts as of May 2019 to approximately 15.9%*3 as of the end of June 2021. As the market expands, there is a growing need to compare and simulate rate plans on websites. However, there are issues unique to city gas, such as a more segmented supply area (compared with electric power companies) and different methods for regional fuel adjustment costs. As such, it is more difficult to collect information and time-consuming to calculate changes in plans, and information management a heavy burden for city gas retailers. The new “City Gas Rate Simulation API / Plan API” is a cloud service that enables the introduction of streamlined, low-cost plan information aggregation and simulation and without any human burden on city gas retailers.

*3 Survey by the Electricity and Gas Market Surveillance Commission

We provide the price simulation logic and plan information necessary to build an online city gas rate simulation system via API, reducing the burden on city gas retailers to build this themselves. In addition, since we track the plan information for other city gas retailers on our cloud database, the need for management and updating is also reduced. The service provides price simulations that have been used in many calculations on “Enechange,” the largest electricity and gas comparison website, since the deregulation of electricity.
Since the service covers representative plans in the three metropolitan areas at the time of release, it can meet the needs of city gas retailers who want to expand their sales areas as well as electric retail companies who want to start offering city gas plans. We will continue to expand the service area and plans in the future.

About EMAP, a SaaS-type marketing platform for energy companies

https://enechange.co.jp/emap-lp(in Japanese)
We developed EMAP by utilizing the assets and expertise we have cultivated through our comparison business since the start of electricity deregulation in Japan. It targets companies that are considering digitalizing and increasing the operational efficiency of the energy industry. EMAP is a one-stop support service, including the starting up of retail businesses, web-based customer acquisition, and customer management systems introduction and replacement.

We are pleased to announce that we will be expanding our Simulation/Plan APIs, which have been well received by electricity companies, to city gas companies. We will continue to develop and provide services that contribute to reducing the burden of designing rate simulation applications for electricity and gas retailers, thereby promoting the digitalization of the electricity and gas industries and encouraging users to make the best choices for their energy price.

ENECHANGE is an energy technology company that promotes a carbon-free society through digital technology with the mission of Changing Energy For A Better World. We offer services based on data utilization in the field of the 4Ds of Energy: Deregulation, Digitalization, Decarbonization, and Decentralization. Our company’s roots come from an energy data lab at the University of Cambridge, U.K., a country where liberalization is mature. ENECHANGE has a British subsidiary, SMAP Energy Limited, as well as a global network and analytical technology for energy data.