ENECHANGE Looks Back at the Decade Since the Great East Japan Earthquake: Assessing the Trajectory of the Energy Industry Through Data

ENECHANGE Ltd. (Head Office: Chiyoda-ku Tokyo; Representative Director & CEO: Yohei Kiguchi; Representative Director & COO: Ippei Arita) was founded in 2015 as a way to respond to Japan’s energy issues, spurred by the Great East Japan Earthquake. In December 2020, ten years after the quake, we took a major step forward with our listing on the Tokyo Stock Exchange Mothers Market. Now, a decade after the Great East Japan Earthquake, we want to review how energy in Japan has changed with reforms to the electrical power system, by looking at the data below.

One of the reforms to the energy system is the full liberalization of the electricity retail market in April 2016. It is now possible for other players to enter the electricity market, where power has been supplied by the ten major energy companies that cover Japan. This means consumers can now freely choose their energy company. There are more and more retail businesses registering each year, reaching 709 companies as of March 5, 2021. However, not all registered companies supply electricity. The number of energy companies with a track record in supplying power, based on their results summaries for November 2020, was 434 in the low-voltage division, which includes households, and 404 in the high-voltage division aimed at corporations.

*Created by ENECHANGE based on “The Electricity Survey Statistics Table”, Agency for Natural Resources and Energy

Since joining the electricity market in 2016, the new entrant energy companies, who provide competitive electricity pricing plans by e.g. adding a range of tariffs, have become an increasing part of our lives. As of November 2020, they held an approx. 18% share of the household market and an approx. 30% of the corporate market. At the same time, our own share of switches to new energy companies is estimated at 1.3% for households and 1.8% for corporations. We feel that the act of comparing electricity/gas on the internet and switching over is still just starting to become popular. (In the United Kingdom, where energy liberalization has become well advanced since liberalization in 1999, 60% of the population use the internet to compare and switch, according to government statistics (data from Ofgem, “State of the energy market 2019”).)
Here is a look at which new energy companies appear in lists of companies with large market shares 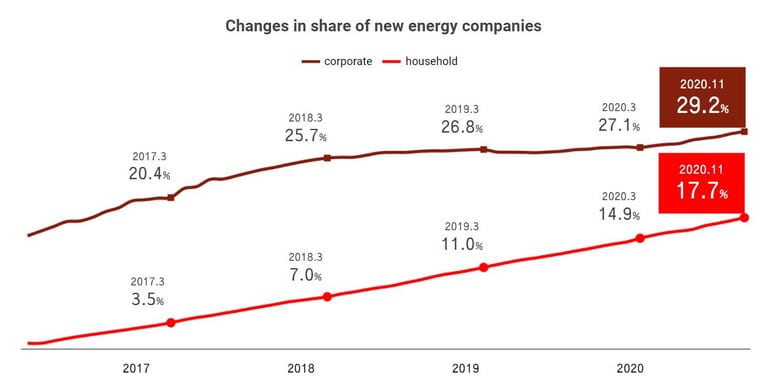 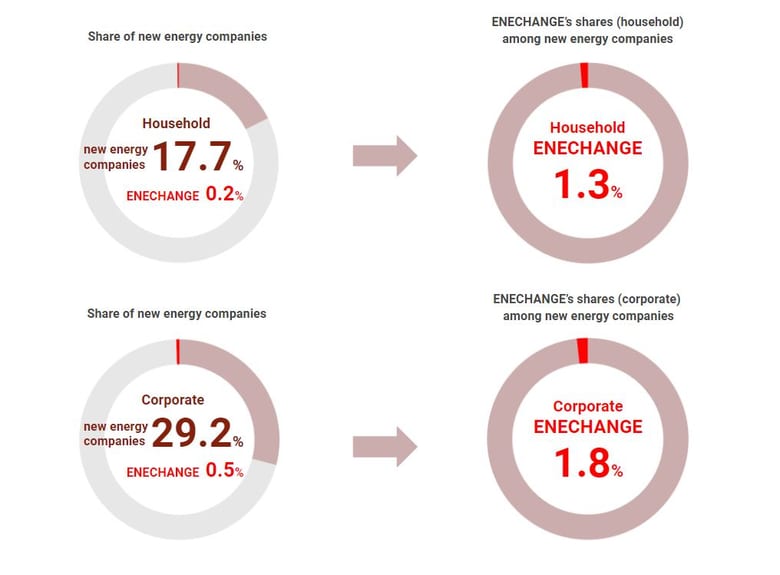 For household use (low voltage lights)
The top ten for households are the major companies that provide services with contact points with consumers. It consists of three major city gas companies, three major communication companies, one major oil company, and one housing manufacturer. All of these are companies that had strong face-to-face (offline) contact points with customers prior to liberalization. Together, they account for 90% of the top ten. The only independent new energy company is Looop, which comes in at No. 9.

For corporate use (high voltage)
In the high voltage area, with contracted power 50kWh or more and less than 2,000 kWh, five affiliates or related companies of major energy companies are in the top ten. Other than these, just like for households, companies with strong offline channels that have had strong face-to-face (offline) contact points with customers from before liberalization, such as major city gas companies, major oil companies, major communication companies, and a major general trading company take the top nine spots. The only independent new energy company is F-Power, which comes in at No. 5.

*Created by ENECHANGE based on “Electricity Demand Performance,” Agency for Natural Resources and Energy.

Changes in number of switches to new energy companies

In December 2020, the Green Growth Strategy was announced as part of the government’s drive to become carbon neutral by 2050, achieving an effectively zero level of greenhouse gas emissions. This Strategy includes target figures of 50% to 60% for renewable energy. To achieve the CO2 reduction targets laid out in the Paris Agreement, we need to totally abandon generating energy from coal by about 2030. The ratio of renewable energy as of 2020 was 17.7%, which is about 10% more than 2011, but at the same time, stopping nuclear power plants has led to an increase of about 6% (27.6% → 33.4%) in coal-fired thermal power generation.

*Created by ENECHANGE based on 2020 data from “Power Generation Records” and 2011 data from “General Energy Statistics”, Agency for Natural Resources and Energy.

The changes in the stock prices of two major energy companies (Tokyo Electric Power Company Holdings and The Kansai Electric Power Co.) and two companies rolling out sustainable energy businesses (erex Co.,Ltd.and Renova, Inc.) are compared here. Since the Great East Japan Earthquake, erex, Renova, and other sustainable energy-related brands have been listed on the stock market, and have greatly outperformed major energy companies. In addition, ENECHANGE started its business with the liberalization of the electricity market in 2016 (founded in 2015) and was listed on the stock exchange in 2020.

After the Great East Japan Earthquake, a system was created to specify the purchase by energy companies of electricity generated by sustainable energies such as solar, wind, or biomass power at set prices for a set period for the purpose of diversifying Japan’s energy sources, which relied on thermal and nuclear power. This system is the Renewable Energy Special Measures Act (formal name: Act on Special Measures Concerning Procurement of Electricity from Renewable Energy Sources by Electricity Utilities). Later, energy system reforms started in earnest with the 2015 establishment of the Organization for Cross-regional Coordination of Transmission Operators (OCCTO), followed by full liberalization of the electricity retail market in 2016 and the legal separation of energy transmission departments in 2020. Together with these, market development and revisions to rules regarding the use of transmission lines are being carried out. Moreover, to solve the problem of further increasing renewable energy as a main source for energy generation, the problem of being a country prone to natural disasters, and the problem with depending on imports for a lot of energy resources, the Energy Supply Resilience Act is being prepared in order to toughen up the electricity infrastructure system.

Since the Great East Japan Earthquake, Japan’s energy industry has been set in motion by major changes on the level of once-in-a-century, and as a result, it has changed dramatically from what it was ten years ago. The electric power industry, which used to be non-competitive and a regional monopoly, has evolved into competition in the form of gas, oil, and other different industries entering the market as a result of the electric power system reform. We believe that this is a good thing, as the penetration of liberalization will give consumers more freedom of choice and bring about competition among companies, but we believe that we are still in the early stages, as shown in this document, with the major companies dominating the top positions. Our market share is still low, in the 1% range for both residential and corporate customers, but we believe there is room for growth based on overseas examples.
We still have a long way to go to reform the electric power system to realize a decarbonized society. We will continue to promote the development of our EnergyTech services, seeing the further power system reforms that are scheduled in the future as an opportunity for growth.

ENECHANGE is an energy technology company that promotes a carbon-free society through digital technology with the mission of CHANGING ENERGY FOR A BETTER WORLD. We offer services based on data utilization in the field of the “4 Ds of Energy,” or in other words, Deregulation, Digitalization, Decarbonization, and Decentralization. Our company’s roots come from an energy data lab at the University of Cambridge, UK, a country where liberalization is well advanced. ENECHANGE has a British subsidiary, SMAP Energy Limited, as well as a global network and analytical technology for energy data.